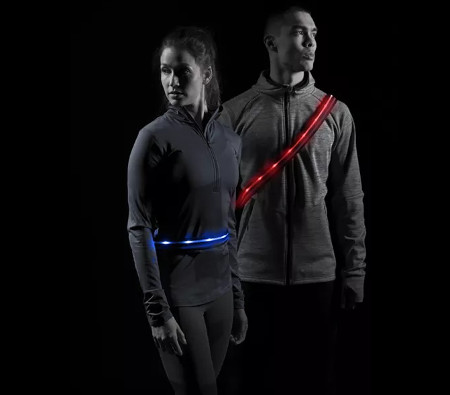 LumaGlo knows that some people like to work out in the evening or early in the morning, before the sun sets or rises. After all, that might be the only time slot that is available for them to be able to get some exercise into their busy schedules. However, running in dark or low light conditions does have its dangers — you are definitely far more difficult to spot, especially when you pound the pavement. It is always good to wear a safety vest or carry some form of illumination with you. This is where LumaGlo’s CrossBelt comes in handy.

The LumaGlo CrossBelt is a next generation wearable illumination device that comes with bright, multi-colored LEDs that will be able to provide runners, cyclists, walkers, and outdoor enthusiasts with unparalleled nighttime safety

This brand new solution delivers 360° wearable illumination for the ultimate in low- or no-light visibility. It is already available as a pre-order on Kickstarter, where you wear it as a belt or a sash. It does far more than offer front and back lighting, as the wearer can be visible from all angles. This will greatly increase your chance of being spotted. The LEDs will function in eight distinct patterns, hence delivering intense illumination which will help distinguish the wearer from background lights. Just in case there an emergency situation, there is a bright red strobe setting which can be activated to attract the attention of those nearby.

A patent-pending automatic brake light feature is also part of the deal, where the built-in accelerometer will be able to alert others when the wearer stops as it automatically causes the LEDs to switch to a strobing bright red pattern. Whenever you start to move again, the LEDs will return to normal illumination.