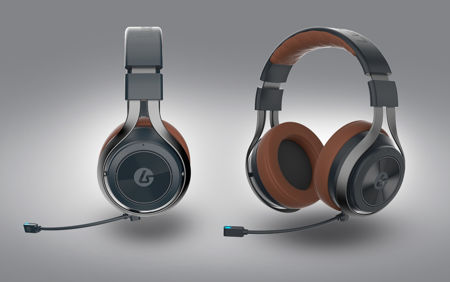 Earlier this year, we did come across the LucidSound LS30 universal wireless gaming headset, and it looks like the folks over at LucidSound have not stopped working since, having announced a couple of new models that will reside on both ends of the LS30 – namely the LS40 Wireless Surround Universal Gaming Headset and the LS20 Amplified Universal Gaming Headset. Both of these new models are tipped to launch in time for the holiday season this year, where regardless of the model that you choose, the new headsets will merge advanced audio engineering with the latest in modern design aesthetics in order to deliver a next-generation audio experience for all gamers.

For starters, the LS40 advances the best-in-class audio experience even further thanks to the introduction of state-of-the-art DTS Headphone:X audio technology. It will work alongside the headsets’ specially crafted 50mm drivers, where the sound is tuned in-house by LucidSound audio engineers so that it can deliver spatially accurate, audiophile-grade 7.1 surround sound. Not only that, gamers are able to choose from a couple of surround-sound modes (movie and gaming) as well as a trio of enhanced stereo modes, (regular, wide and front speaker) in order to further customise their audio preference.

With the LS40, it makes use of advanced uncompressed wireless technology that does away with interference and delivers a rock solid signal with unparalleled audio fidelity. You can also alter game and chat volume without having to locate ungainly buttons, while the all-new Smartphone Control provides full support for cell phones, so that you can entertain an incoming call, hang up and control audio playback via the ear-cup alone. The integrated rechargeable battery delivers up to 15 hours of uninterrupted gaming, while its built in mic-monitoring enables players to hear their own voice through their headset.