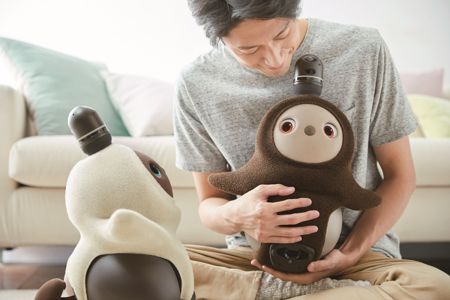 While we live in an increasingly connected world with so many ways to hook up with different people, you might be surprised to find out that more and more people than ever before are suffering from the malaise of loneliness. Suicide rates are up in developed countries, and one can be surrounded by family and friends and yet feel detached from it all. GROOVE X hopes that those who find it difficult to build a bridge of friendship or to love someone else will be able to overcome such obstacles with their all new companion robot known as Lovot.

Adhering to the sage advice that “A little love can change the world”, the Lovot is touted to be a home robot that will stir up the owner’s instinct to love. I suppose another way of doing so would be to obtain a pet, but then again a pet has its other drawbacks such as having to care and maintain it, clean and bathe it regularly, pick up after its poo, and sending it to the vet for its annual check-up or vaccination. Not so with a robot like the Lobot though, which will arrive loaded with advanced technology including Emotional Robotics.

Being sold as a set of 2 units, the Lovot will also feature touch sensors that are located throughout its body, in addition to a six-layered eye display, making it far different from conventional robots that are normally found in modern day households. The Lovot might not vacuum your home when you are not around, but it will definitely beg for attention and get in your way and with those who live under the same roof. When it sees people that it does not know, it will shy away from them. Meant to provide owners with a sense of relief and contentment, the Lovot hopes that owners will learn to touch and hug it in order to feel the joy of loving something.

Expect the Lovot to begin shipping in the fall or winter season next year, so if you are still lonely between now and then, perhaps it would be wise to seek out a counselor or close companion with whom you can share your life and struggles with.