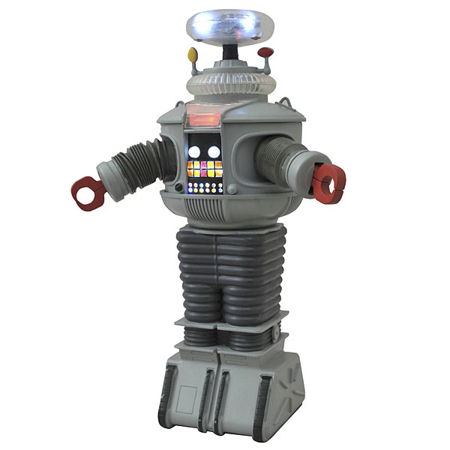 There is just something about an on-screen persona that becomes larger than life when it ends up being produced as a toy, and that the toy itself would be an above average make where build and quality are concerned. Having said that, anyone remembers the robot B9 from Lost in Space? The folks over at Thinkgeek have managed to come up with the $49.99 Lost in Space B9 Electronic Robot that will not only boast of lights and dialogue from the show, but it will also sport claws that can open – as well as close, in order to have that wee bit of mean streak in it.

Interestingly enough, the Robot in Lost in Space never really had a name. It was more or less just called “Robot,” plain and simple, although if one were to dig deeper, then the full designation would be: B-9, Class M-3 General Utility Non-Theorizing Environmental Control Robot. This particular purchase is cute in its own aspect, as it stands at 10″ in height and will boast of lights and sounds that have been taken straight from the classic sci-fi TV show. There will be lights on his head and chest that blink all the time B9 is on, and extra lights and dialogue will be triggered with the push of a button, including: “I will accompany you, you may need protection,” “Cannot compute, programming data insufficient,” and his famous cries of “Danger!”

A trio of AAA batteries will power this, where you can also have fun opening and closing his claws, extend his arms, and turning his torso to the left and right. Heck, the B9 robot also comes with wheels in order for him to get rollin’!