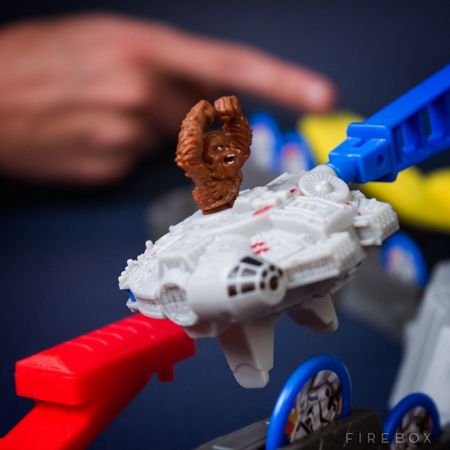 Ah, the power of commercialization. I am quite sure that you are well aware of Star Wars: The Force Awakens arriving at a cinema near you this coming middle of December, and even the pre-sales of the tickets themselves have caused the Internet to crash – at least for the websites offering such tickets. This is to be expected, considering how popular the movie franchise is that has captured the imagination of generations, and here we are with a Star Wars take on Germany’s 1994 children’s game of the year – the £29.99 Loopin’ Chewie will take over from Looping Louie.

How does Loopin’ Chewie work? Well, Chewbacca pilots the Millennium Falcon in a bid to pick off them pesky Stormtroopers, and basically, the last Stormtrooper standing wins. This is truly an exhilarating game for 2 or 3 players. Playing it is a snap, as all that you need to do is to swing the lovable Wookie known as Chewbacca around in an attempt to take out Stormtroopers. Best of all is, there are no batteries to worry about with Loopin’ Chewie, and neither do you need to fret about your children getting screen time with this.