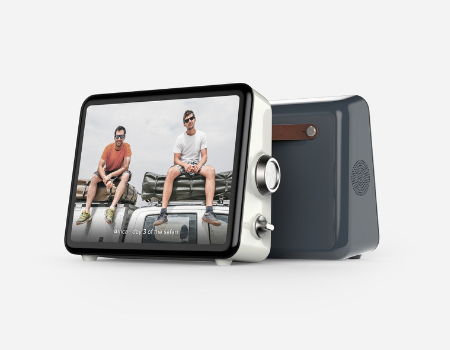 Smartglasses do seem to be a budding industry not too long ago, but unfortunately, it does not seem as though the idea of smartglasses has caught on in a big way. Still, this does not mean that there is no market at all for devices that fall under a similar category, which is why the launch of Loop is certainly worth checking out. Loop happens to be the first personal display from the company that will help people to remain better connected to one’s friends, family and memories that they cherish. It does pay homage somewhat to the classic design of early TV’s, as Loop will allow ordinary folk to easily view and share photos and videos from multiple sources easily, be they from social media channels, cloud storage, mobile devices, or hard drives, and this can be done in a single screen right smack in the comfort of your living room.

After all, isn’t this what the holiday season is all about? To share good memories with everyone all around, as we reminisce on those good times, and perhaps even holding a minute of silence in honor of those who have gone before us. The Loop will be made available for pre-order for $199 a pop, where it carries a targeted shipping date of summer next year.

Loop will be able to stream photos from Dropbox, Facebook, Instagram, Flickr, iPhoto, and Google Photos, allowing users to share directly from an iOS or Android phone. All photos are organized into channels based on subject (Paris 2015) or source (Jim’s Instagram) in order to assist in curating the viewing experience. Loop will feature a couple of analog knobs that are on the side so that it can move through pictures and change channels, while air gestures are used to pause a photo, or perhaps one can tap the top of the device to ‘like’ pictures. Loop also boasts of a high resolution 2048×1536 display which arrives in navy-gray and arctic white.