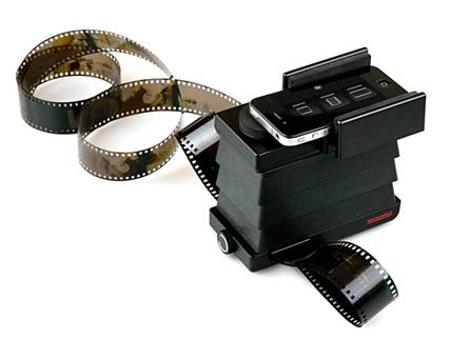 We have seen our fair share of Kickstarter projects, and while some of them fail to take off as they did not manage to raise the minimum amount of funds, others achieve their funding goals in a matter of hours – not even days, and this has led the folks behind these projects to come up with extended goals to further add more features to the final product. Well, here is one Kickstarter project that has yet to achieve its funding goal, but it is well on the way there with 20 days to go and $8,000 short of the $50,000 goal – the Lomography Smartphone Film Scanner.

The name itself, the Lomography Smartphone Film Scanner, is pretty much self-explanatory. With this nifty little device, you are able to scan, edit and even share your 35mm films over social media and email. All you need to do is turn on the scanner back-light, insert your film, snap a photo of it with a smartphone or other compatible device, make use of the included app to edit and share, and you are good to go. All it takes is but an instant and you will eventually end up with a digital version of your film that can then be archived, emailed and shared with friends.

This is a spanking new product that has been brandished to be the “perfect tool for analogue photographers and retro-enthusiasts.” Do you agree with that assessment? Right now, the Lomography Smartphone Film Scanner will remain a Kickstarter exclusive, and assuming that all goes well and the planets are aligned properly, delivery is expected to happen this coming March.

The included Smartphone Film Scanner app will play nice with both Android and iPhone platforms, where it is capable of converting all types of 35mm films, including color negative, B&W negative, and slide among others. There will also be panorama stitching thrown into the mix alongside the ability to animate LomoKino stills for that added visual punch.