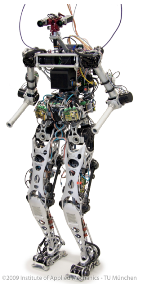 Remember that robot named AILA that we reported on a while ago? She was the white one with a female form that knew how to hold things. Well, it isn’t the only robot to come out of Germany, for here is LOLA.

LOLA is a humanoid robot presented by the Technical University of Munich and the Institute of Technology Autonomous Systems in Munich.

I have a video of it after the jump, and though the speed may be slow, it will be able to go at 5 km per hour, eventually. The real bonus is that LOLA can walk autonomously, and knows how to identify and avoid objects. The goal of project LOLA is to have a two-legged robot that can move around like a human.

Even if it doesn’t look human. LOLA stands 1.8 meters tall and weighs about 60 kilograms. She has 25 joints in her body, and can see via a dual pair of 5 Megapixel cameras.

LOLA reminds me of a certain science-fiction movie called Saturn 3. In the film was a big robot named Hector, and it eventually became a killer. I probably shouldn’t have brought up that last part.