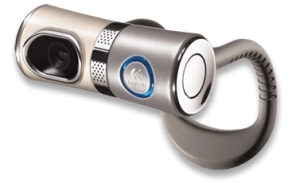 These days Logitech pretty much owns the webcam market save Apple’s iSight. We’ve previously written about their excellent webcams, and now they have an even better one out, the Logitech QuickCam Ultra Vision.

Innovation wise, the Ultra Vision is pretty awesome thanks to the RealLight 2 technology which gives a clear picture no matter the lighting situation. This is the opposite of normal webcams that give a dark, fuzzy picture unless the lighting is 100% perfect. Although the rest of the Ultra Vision isn’t as innovative, it’s still got some great features. The quick preview button allows you to take a peek at yourself to make sure you look decent before entering a video conference and the snapshot button lets you take stills easily. The glass lens, which is high quality, combined with the integrated microphone, 1.3 megapixel sensor, and the previously mentioned RealLight 2 technology make this a pretty sweet webcam. If that wasn’t enough for you greedy people, out of the box, this thing is ready to be used with Yahoo! Mesenger, Skype, MSN, and Logitech VideoCall.

This last feature won’t make you more productive, increase image quality, or save you any money, but it will mimic you! With the Logitech Video Effects software, you can create an animated avatar that will mimic your facial expressions. Somehow the camera determines what your face is doing then has the avatar do that. It’s all quite scientific.

Anyone on the market for a webcam this holiday season needs to take a look at the Logitech QuickCam Ultra Vision, it’s brand new on the market and has some awesome features (it mimics you!). $130 from Logitech.