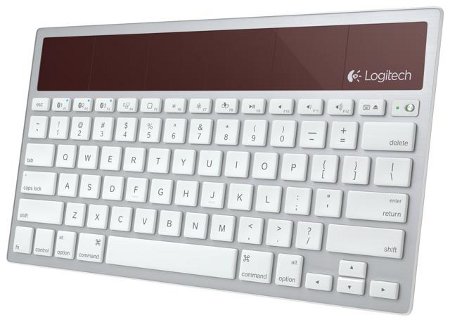 You can say that the world is extremely hungry for energy – new and developing nations are consuming more and more resources as they focus on building up their infrastructure, while the more developed countries work on improving efficiency, by making the most out of the least that they have. Solar power is one renewable energy source that should be looked into serious by just about any company, as it is free, and many countries do get a decent amount of sunlight each year. With the Logitech Wireless Solar Keyboard K760, you know that your prayers have been answered, as it will target the Mac, iPad and iPhone.

Sporting a built-in Bluetooth connection, the wireless keyboard will continue from where the Logitech Wireless Solar Keyboard K750 and the Logitech Solar Keyboard Folio for iPad left off. You get an easy-switching capability that enables you to pair different devices simultaneously, where switching among them is as simple as pushing a button.

Denis Pavillard, vice president of experience design at Logitech, said, “Laptops, smartphones and tablets are ubiquitous – both at work and at play. Because Apple devices are central to this trend, Logitech is committed to improving the way people interact with them. With its simple solar charging, familiar Mac layout and comfortable design, the Logitech Wireless Solar Keyboard K760 will appeal to Apple users worldwide.”

The Logitech Wireless Solar Keyboard K760 comes in a stylish form factor that is compact, so that it will not look out of place when working alongside your beautifully designed product from Cupertino. Thanks to its aforementioned easy-switching Bluetooth connection, you are able to pair your keyboard to as many as a trio of devices and switch among them without the need to reconnect.

The minimalist design on the Logitech Wireless Solar Keyboard K760 even comes with Mac-specific keys, such as Command, Brightness, Eject and more to make you feel as comfortable as possible. Not only that, the unique Logitech concave key design will enable you to be more comfortable when typing, delivering speedier response and greater precision compared to typing on an on-screen keyboard.

Expect the Logitech Wireless Solar Keyboard K760 to arrive in the US and Europe from next month onwards, where it will retail for $79.99 a pop.