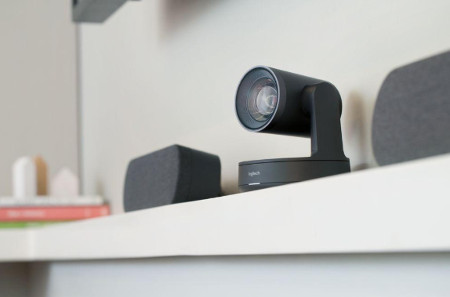 With Internet connectivity being commonplace, fast, and affordable these days, it is no wonder that the idea of a global office is a whole lot easier to implement than ever before. From voice conference calls in the past, having video conference calls happen to be the next evolutionary step. Logitech has come up with a couple of new Logitech Video Collaboration offerings. The first of the two will introduce intelligent automation to video meetings, while the second happens to be a new video conferencing portfolio that will increase the bar when it comes to USB-connected conference cams.

It is rightly understandable that majority of the meeting rooms at offices have not taken video conferencing into consideration, where the presence of overhead lighting, walls of windows, and plenty of hard surfaces present real problems such as shadows, glare, and echo. The placement of the camera is also important, and most of the time, remote participants tend to see far more table than their colleagues. Logitech RightSense intends to change all of that, being a suite of technologies in Logitech devices that will help make meetings better, easier, and automatic.

The Logitech RightSight camera control will help locate people within the camera’s field of view, where it will frame meeting participants in the room automatically to do away with manually adjusting the camera angle. This will help participants feel more natural in meetings, and with that, increase the interaction level to a more comfortable degree.

With Logitech RightLight, it will optimize light balance as well as color in order to prioritize the appearance of faces over objects and surfaces, while rendering natural-looking skin tones regardless of how dimly lit the room is, or in places with backlight.

Communicating well includes listening well, and Logitech RightSound will help improve vocal clarity through the suppression of background noise and echo, auto-leveling voices, as well as focusing on active speakers.

Both Logitech RightLight and Logitech RightSound technologies are available for free in a range of Logitech ConferenceCams and webcams, while Logitech RightSight will only arrive later this year via a software download.