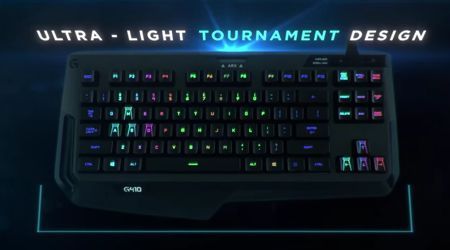 Gamers can be a very spoiled lot, which is why they would demand for nothing but the very best where hardware is concerned. After all, when the last round is played and you still lose despite giving your all and having nothing but the best in class peripherals, that is when you heave a sigh of relief and claim that you have a really throbbing migraine – which meant you would have been undefeated if you were on a roll. Typical gamer ego talking here, but if you so happen to be in the market for a gaming keyboard that has pedigree, then the Logitech G410 Atlas Spectrum TKL Mechanical Gaming Keyboard does sound as though it is worth checking out.

This ultra-light keyboard will boast of Logitech’s exclusive Romer-G mechanical switches, where it comes with 25 percent faster actuation compared to standard mechanical keyboards. The Romer-G mechanical switches will also come with an actuation point of 1.5 mm, allowing them to have a distinct advantage in receiving commands more quickly, so that you end up with an edge in competitive games where every single millisecond matters. There will also be improved durability at 70 million keystrokes, which is up to 40% longer compared to the rest on the market, allowing you to play with confidence.

Since it comes with a collection of vital keys where gaming is concerned, the Logitech G410 Atlas Spectrum is easy to tote around, be it to LAN events or a friend’s house, as it fits into smaller gaming spaces without missing a beat. There will be no number pad or macro keys to get in the way, and the additional space will let you make wide motions with your mouse. Apart from that, its compact design ensures that your hands will come closer together for improved comfort.

The Logitech G410 Atlas Spectrum is tipped to arrive Stateside as well as across the pond from early this month, where it will feature a recommended retail price of $129.99 and €149, depending on which side of the Atlantic you live on.