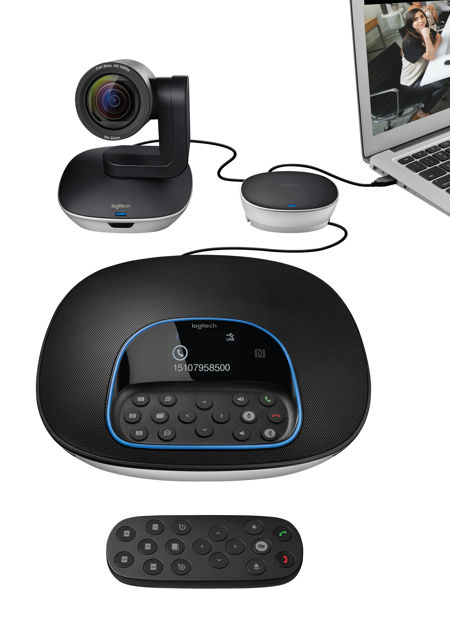 There is power in synergy, and a whole lot more gets done in a teamwork style than if you were to fly solo – except perhaps, if you are painting a masterpiece like the Sistine Chapel and would not want any other artist’s input in the matter. Well, modern day businesses dictate that working as a group will reap far more benefits than being a lone ranger, which is why Logitech, known for wireless keyboards and even gaming mice, decided to furnish one with the relevant tools to get the job done – in the form of the Logitech GROUP.

The Logitech GROUP will offer crystal-clear audio and high-quality High Definition video conferencing for groups of up to 14 people, or up to 20 with the optional expansion microphones. Logitech GROUP will not break the bank in these economically trying times, where it is affordable and enables organizations to use the same room system configuration for whichever unified communications, web conferencing or video conferencing application that is being used at the moment. The solution is so simple that it can be deployed in a matter of minutes, enabling any meeting space to be a flexible multi-use video collaboration space.

The Logitech GROUP also happens to be the successor to Logitech’s popular ConferenceCam CC3000e, where it will boast of a full-duplex, sleek speakerphone that delivers sound that is crisp, clear, and can be heard by everyone in the meeting. Boasting of a metal case which will help improve acoustic performance, it also isolates the microphone and speaker in order to deliver premium audio quality, so you don’t even need separate earbuds with a microphone. The combination of a quartet of omnidirectional microphones, acoustic echo and noise-cancelling technology ensures that conversational realism is achieved, and conference participants are able to converse within a 20-foot diameter around the base, or extend the range to 28-feet with optional expansion microphones. It can also play nice with Bluetooth enabled mobile devices for audio calls.

Other features include 1080p video quality, a wide 90-degree field of view and smooth pan and tilt controls, while it will be accompanied by the likes of on-board H.264 with scalable video coding to free up bandwidth. Expect the Logitech GROUP to arrive worldwide next month for $999 a pop, while expansion microphones will be sold at $299, and if you would like to pick it up in a bundle, where you get the GROUP with two expansion microphones, that will retail for $1,249.