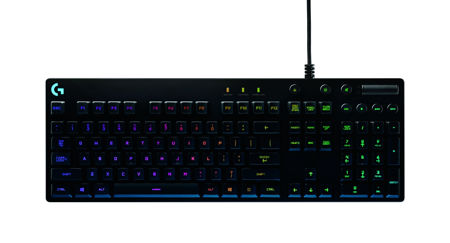 Any gamer worth his or her salt would definitely like to have nothing but the very best tools available to them for their gaming sessions which are normally more intense than the rest. This translates to ensuring that quality is at the forefront of each device, and hence, not any normal keyboard would suffice – which is why the Swiss-based company’s latest release is the Logitech G810 Orion Spectrum gaming keyboard. This happens to be a full-size RGB mechanical gaming keyboard which will integrate industry-leading technology and quality of construction in a uniquely crafted design to deliver peak performance for a pure gaming experience.

First of all, the Logitech G810 Orion Spectrum RGB Mechanical Gaming Keyboard will boast of Logitech’s exclusive Romer-G mechanical switches, which claims to offer 25 percent faster actuation compared to standard mechanical keyboards, in addition to customizable RGB lighting and dedicated media controls. There are fine aspects of the keyboard that have been taken into consideration, from the simplest details such as fingerprint-masking matte texture and a durable braided cable, to the most complex details, including advanced RGB lighting and ultra-fast, ultra-durable Romer-G mechanical switches, having undergone precise engineering.

With the exclusive Romer-G mechanical switches, these deliver near-instant responsiveness, thanks to an actuation point of 1.5 mm so that you can gain an edge in competitive games, as professional level gaming sees how each millisecond matters. Not only that, it comes with improved durability of 70 million keystrokes, up to 40 percent more keystroke operations than other standard key switches on the gaming peripheral market.

The implementation of Logitech Gaming Software (LGS) lets one select and personalize each individual key light from a spectrum of more than 16.8 million colors, as well as the ability to synchronize lighting effects with other Logitech G gaming gear. One is able to mark keys by color to keep track of spells and other commands, as well as change colors to match your setup. Central backlighting makes it a snap to hunt down the right keys in game and in the dark and LGS will also feature pre-loaded custom lighting profiles for more than 300 games.

The Logitech G810 Orion Spectrum RGB Mechanical Gaming Keyboard is already available in the U.S. and Europe for $159 and €189, respectively. Any takers?