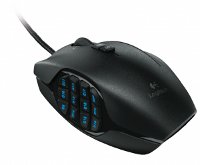 When it comes to gaming peripherals, we gamers can be a very picky lot. After all, not everything that is made or rolls off the production line will cater for every single person here on earth – there will always be a select few who love nothing better than to nitpick on select features, or rather, the lack of it. If you are an avid MMO (Massive Multiplayer Online) gamer, then you will most probably have given Diablo a good whopping in his (or should we say, her) latest iteration many times over, and have currently settled on a character development path of choice after giving the many classes a go.

Surely your current standard issue mouse would also be on its last legs now, with all the furious clicking that has been going on the past few weeks. Isn’t it time to introduce an upgrade to your gaming peripheral arsenal? This is where the latest Logitech G600 MMO Gaming Mouse comes in, and we shall take a look at what makes it tick right after the jump.

For starters, the Logitech G600 MMO Gaming Mouse is touted to be a highly customizable device, where it is also easy-to-use despite looking as though you need some rocket science degree to figure things out. I cannot blame you for that though, especially when you consider the number of buttons that the Logitech G600 has on it – 20 in total. Out of the 20, a dozen of these will be thumb buttons, which are set in two groups of six each on a meticulously designed thumb panel in order to make it easily reachable in a jiffy, delivering no-look navigation and faster game play.

Of course, I do believe that the learning curve is going to be steep for some, but hopefully one’s latent gamer instincts will kick in easily, and everything will be smooth sailing in no time. It can be used straight right out of the box, without the need for any drivers, and has a G-Shift function which makes it a snap to double the number of actions you can perform with any button.

The Logitech G600 MMO Gaming Mouse is tipped to arrive in the US as well as across the pond sometime next month for $79.99 a pop.