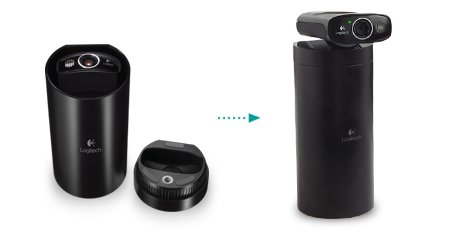 When it comes to computer peripherals, there is one name that tends to linger on the minds and tongues of many – Swiss maestros Logitech, and this time around, they have something a little bit different from a mouse, and neither is it a keyboard. Basically, we are looking at the Logitech Broadcaster Wi-Fi Webcam which allows you to stream and create videos. It does not matter if you are a video professional, a blogger or a hobbyist, this new webcam delivers the flexibility for you to perform more than other webcams, and among the features include live streaming, the ability to shoot videos from two different angles or perhaps perform a video chat session on your favorite Mac machine.
With the Logitech Broadcaster Wi-Fi Webcam, Logitech claims that it is a snap to create professional-looking videos from your Mac, where you are able to stream live video directly to Ustream, rely on an iPad, iPhone or Mac to control and preview the video. The Logitech Broadcaster also doubles up as a second video camera if the situation and need arises, introducing a complementary perspective to capture content beyond your Mac’s embedded webcam. Apart from that, it has built-in wireless connectivity that enables you to shoot from just about any angle you of your choice. If you are feeling more adventurous and creative, just capture the two views and stitch them together, now how about that?
Mike Culver, vice president of brand development for consumer computing platforms at Logitech, said, “The Logitech Broadcaster Wi-Fi Webcam lets you stream and record like a pro. It helps you make the most out of your existing Mac OS and iOS video setup for more dynamic live streaming, recording and video chatting. It goes where a built-in webcam can’t, and with one press of a button, it’s easy to switch between your built-in webcam and the Logitech Broadcaster Wi-Fi Webcam, so your friends and audience can enjoy a standard view or move around the room with you.”
It can also let you record video with QuickTime or Photo Booth, edit and view videos with iMovie or Final Cut Pro, and video chat with FaceTime, iChat or Skype. The Logitech Broadcaster Wi-Fi Webcam is tipped to arrive in the US as well as across the pond, if it hasn’t already, from this month onwards for $199.99 a pop.
Press Release