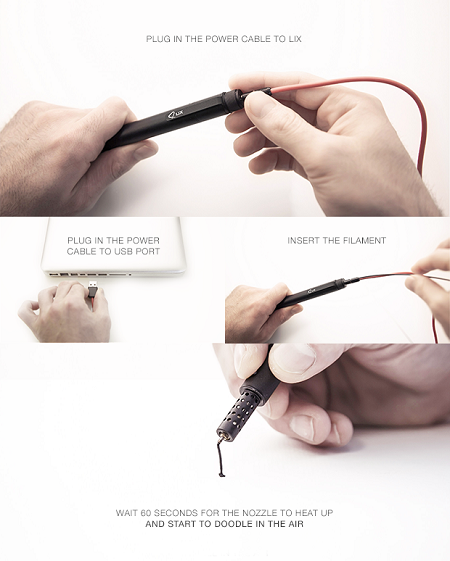 When you get a flash of inspiration, you want to flesh it out as fast as possible so you can begin to sculpt it into a fully finished idea. Depending on the project, this also means making a prototype. If you don’t like scrawling out ideas in 2D, then you’ve likely gone digital to work in a program that will allow you to see a 3D version of whatever you’re working on. However, there is a bit of setup involved.

If you’d like to go from idea to a tangible form as soon as your imagination begins to take shape, then the LIX would be very handy to have around. This is the same idea as the 3Doodler that we saw previously, but it has a more professional look and feel. Not to mention it’s powered via USB, which means you can use this just about anywhere. All you need do to start drawing in the air is to plug this in, put in a plastic filament, and wait 60 seconds for it to heat up.

This device will only be limited by your imagination, as you can make jewelry, interior decorations (if you have enough of the plastic to do so), or make drawings that don’t need paper. You will definitely need refills of the plastic, which will cost around $10 for a bag of 30 straight rods. The pen itself will cost around $135, but it does come with three bags of ABS/PLA plastic. This is perfect for creative minds who don’t want to be confined to paper and pencil, but you will want to make sure you have an appropriate space to work in where it won’t be bumped or crushed by others.