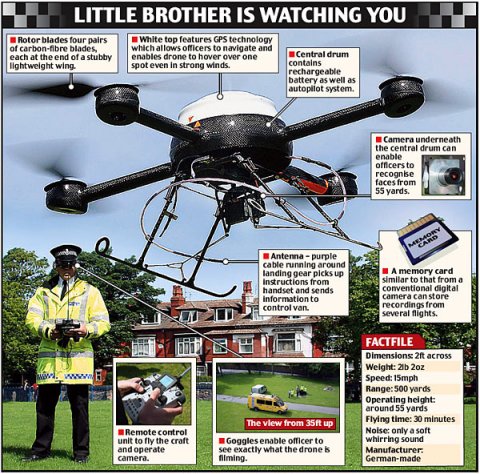 This looks like something that wouldn’t be out of place in “The Terminator”, the Microdrone, a remote control spy camera being trialled by the police in the UK.

Like the X-UFO the Microdrone uses four separate rotors to fly and is equipped with CCTV cameras to monitor suspects below (thermal imaging is also possible at extra cost). The Microdrone is controlled by an officer on the ground who wears a special visor (similar to the iTheatre) which receives and displays the video transmitted back from the drone.

This all looks pretty futuristic and a bit big brother (which is back on UK screens next week, oh joy), considering there is already one CCTV camera to every 14 people in the UK having a few more flying around probably isn’t going to make that much difference.

Via This is London, thanks.