I’m a racing fan, I can tell you the names of the top three finishers from last week’s Champ Car and Formula 1 Races.

I don’t mind Kimi’s new tribal tattoo, or the fact that Will Power should be weirdly related to Scott Speed, (and possibly Dick Trickle).

Linux nut Bob Moore, marketer, race nut, and apparently fairly swell guy. Is trying to pull together the funds to sponsor a Linux Indy Car in this year’s Indianapolis 500, (if you’re not aware, it’s a small get-together of 260,000 of your closest friends to watch 33 people turn left and go really fast for 500 miles (804.672 kilometers  )).

Sponsoring an Indy car is, to put it lightly,, REALLY EXPENSIVE! As Linux is open source, the advertising funds will need to be raised, (that’s right, give em the money, get the Linux name on the car). 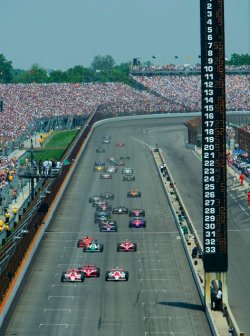 Here’s how it breaks down (Straight from the site)

The goal they have is to be the Primary sponsor. It’s a great goal (350,000 people donating a buck isn’t too bad). More importantly, it is another way to feel a part of The Great American Race. (plus I’m sure you can find the appropriate drinking games online to play along with while watching! (This one is for NASCAR)

Thanks Digg (and Diggers)