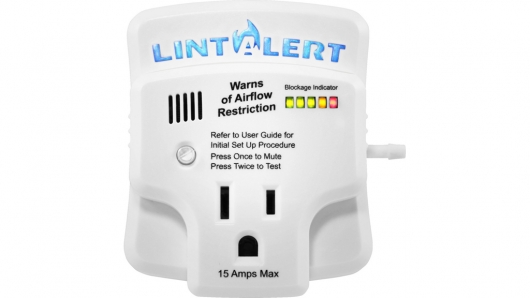 A fire within your home is a major fear for most people. After all, you can get all of the insurance in the world, but even if you all make it out without a scratch, your photos and family heirlooms are just gone.  No amount of purchasing new furniture will replace all that you’ll lose in a fire.  One of the big causes of fires are clothes dryers.  The lint builds up and can cause a fire.  Apparently every day over 40 dryers catch fire in the USB alone.  Which is where the Lint Alert could help keep your family and their possessions safe.

The kit comes with a plug-in to go over your regular outlet.  Then it also has a small hose and a sensor that attaches to the exhaust conduit (the hose) on your dryer.  When lint builds up in that area it’ll go from green to yellow and then onto red, red being the area you really don’t want.  Not only could it cause a fire, but it also wastes energy.  It’s easy to install and has a mutable alarm when there’s a problem.  To pick up one it’ll cost you $49.99 through Amazon.