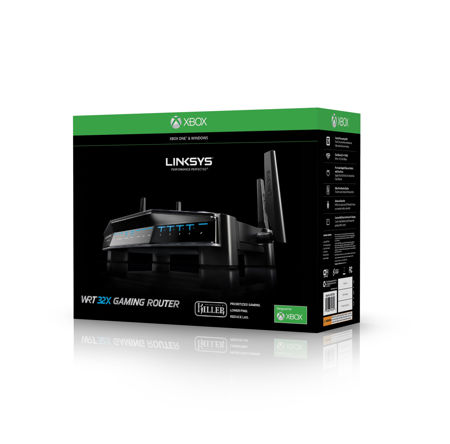 So, you own an Xbox One and would like to make the most out of your gaming experience in terms of connectivity? Unlike with a laptop or PC you can’t just go and buy the best wireless adapter, so there is only one other option: upgrading the router. Having the perfect router would be ideal, which is why networking experts Linksys have come up with the WRT32XB, an all-new gaming router that has been specially designed for Xbox One owners. The WRT32XB will be able to reduce peak ping times by up to 65% on an Xbox One console, ensuring that you have the edge in any shootout or race. In addition, Linksys has ensured that its latest gaming router will include the newest software enhancements for gaming prioritization on any device, be it the PC, console or mobile device.

Being the only router optimized for high-speed gaming when gaming with the Xbox One, the WRT32XB router will incorporate the Killer Prioritization Engine (KPE). The KPE is smart enough to auto-detect any Xbox One, where these include the Xbox One S and Xbox One X, while prioritizing gaming packets automatically so that serious console gamers will always end up with the best online gaming experience. The Killer Prioritization Engine identifies, prioritizes and accelerates Xbox gaming network traffic from any Xbox One console above all other devices in the home, guaranteeing lower ping times while optimizing your online gaming capabilities. This ensures protection from extreme lag spikes at the router level while reducing peak ping by up to 65% on Xbox One consoles. In addition, it has a new user interface and firmware that has been built from ground up just for gaming traffic control purposes.

To make the package more attractive, anyone who picks up the WRT32XB router will be on the receiving end of a three-month membership to the Xbox Game Pass for free! The Xbox Game Pass will offer users with unlimited access to more than a hundred Xbox One and Xbox 360 titles, ranging from fan-favorite exclusives such as Halo, Gears of War and Fable to many others.

Anyone interested in the WRT32XB router will have to invest $299.99 a pop as it becomes available this month.