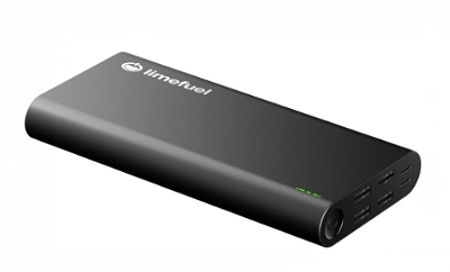 It is always great to move along with the times, and hardware as well as accessory manufacturers know this if they are to remain at the cutting edge of things. Having said that, Limefuel has just announced a brand new Macbook charger that has been specially designed around the new USB Type C technology in order to deliver quick, efficient charging of newer devices. Basically, for those who would like to travel without having to worry about the presence of a power outlet nearby, the spanking new 24,000mAh portable Apple Macbook charger from Limefuel ensures that your precious laptop will be able to keep going all day long.

This portable Apple Macbook charger holds the distinction of being the first portable charger which will be able to support the brand new Type C standard for the recently announced 12” Macbook. This new charger will boast of a pair of Type C ports as well as a quartet of USB ports which can be used to juice up other mobile devices, too. In addition, there is the pass-through technology that will pave the way for multiple devices to be charged simultaneously – isn’t this a game changer and a time saver, all rolled into one? Expect the Limefuel portable Macbook charger to be available some time later in the second quarter of the year for $149.99 a pop.