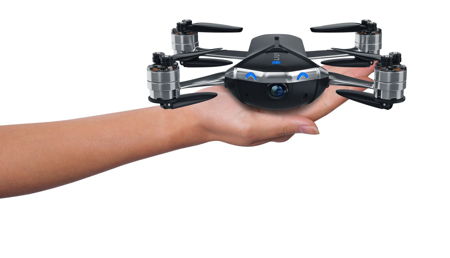 Drones are all the rage these days, with so many different companies coming up with their very own take on what a drone should be like, and what it is capable of. While there are many pretenders to the throne, there are only a few companies which are able to deliver as promised. Lily is one of the more reliable brands, having launched the Lily Next-Gen. What makes the Lily Next-Gen stand out from its predecessors? For instance, this is a drone in the spirit of the Lily flying camera, where it is deemed to be a fun and simple selfie drone for extremely active people.

Sporting a point-and-shoot camera that is able to capture video in 4K Ultra HD or 1080p resolution, you will be able to ensure that precious memories are always stored in high resolution for editing later on. All of the video and still shots are shot using a Sony IMX 214 camera, where you will be able to enjoy 13MP stills in addition to the high resolution video. There are also multiple one-touch functions such as flight operations and media sharing to make it all the easier to use, while the Lily Next-Gen comes with up to 18 minutes of flight time which is extremely impressive considering the rather small form factor of the drone.

The Lily Next-Gen drone is also smart enough to capture follow-me video selfies thanks to object tracking software that can follow the user or another person. Apart from that, it is able to perform non-stop 360⁰ orbits around single point, letting you get that perfect Matrix shot done. For those who want to push the boundaries always, the Lily Next-Gen can be flown up to 3,280 feet from its take-off point, and is also equally adept at flying indoors courtesy of its optic flow and ultrasonic positioning technology that helps it to avoid obstacles below it. To further ensure that it does not get lost when outdoors, the Lily Next-Gen sports geofencing and automatic return to its take-off point. Expect to fork out $699 for the Lily Next-Gen Pro.