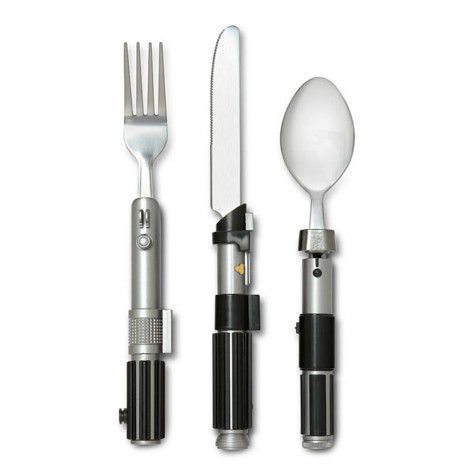 So, the first few reviews of Star Wars: The Force Awakens have started to flood in, and thankfully, all of it seem to be rather positive in nature – which would definite be a huge burden to be lifted off the shoulders of the movie’s cast and crew, taking into consideration the amount of expectations that the film carried after going through a rather subpar experience with the second trilogy in the early 2000s. Just to make sure that everyone at home continues making merry Star Wars style, even during meal times, there is the $19.99 Lightsaber Flatware Set which helps make every meal a little bit more more civilized.

Each set will comprise of three different lightsaber hilts – the Luke fork, Yoda spoon, and Vader knife. Surely this will complement your set of lightsaber chopsticks pretty well, don’t you think so? After all, the fork features Luke’s lightsaber hilt, the spoon features Yoda’s, and the knife features Vader’s, and it should not be too long before everyone else starts to duel against one another – which should incur the wrath of mom at the dining table. This is not only an officially-licensed Star Wars merchandise, it is also a ThinkGeek creation and exclusive.