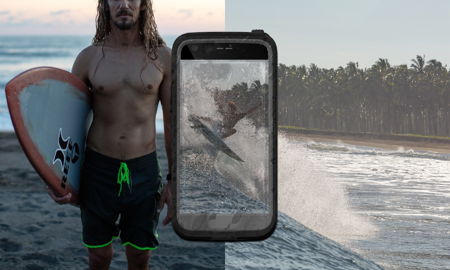 South Korean consumer electronics giant has come up with its fair share of winners in the past in terms of mobile devices, and it does not look as though they are about to stop their impressive track record anytime soon. In fact, their flagship smartphones from the LG G series have always been impressive to say the least, and their latest release, the modular friendly LG G5 have definitely wowed the masses ever since it came out. Having said that, if you happen to have recently picked up the LG G5 for yourself, it would be best to provide it with the adequate amount of protection required such as a protective case, and what better way to do so than with the LifeProof FRĒ?

After all, LifeProof happens to be the top selling waterproof case to date, and this is the first first case from the company for an LG device, and what better way to make a splash of an entry than by having it adorn the flagship model from LG? The LifeProof FRĒ has been specially designed with award-winning four-proof protection in order to guard the LG G5 from water, dirt, snow and drops. LifeProof actually developed FRĒ as part of the “Made for LG” program, which would ensure that every detail was considered when crafting the case in collaboration with LG, just in time for the G5 to arrive recently in the US.

As the LG G5 boasts of a sleek, metal body, a Slide-out Battery and a Modular Type design, rear fingerprint scanner, and a dual rear camera with a standard and 135-degree wide-angle lens, which happens to be the widest available in any smartphone, the LifeProof FRĒ will be able to guard the LG G5 from frigid water, coarse sand, sticky mud and hard hits thanks to its legendary protection. FRĒ has been specially outfitted to keep the LG G5 safe in up to 6.6 feet of water for an hour, and will be able to meet military standards for shock and impact protection, including drops up to 6.6 feet. Those who are interested will be able to pick up the FRĒ for the LG G5 for $79.99 – minimal investment for peace of mind, don’t you agree?