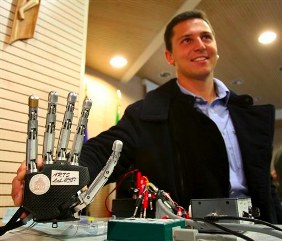 The idea of cyborgs is sort of a science fiction staple. From the Six Million Dollar Man to the Teen Titans’ Cyborg, the idea of a half-man, half-robot has fascinated us for years. Even Luke Skywalker had that artificial hand.

It would appear that science fiction has become science fact as a neurologist Paalo Maria Rossini has created the LifeHand. This LifeHand allows the wearer to control the robotic hand on thought processes alone.

Unfortunately, none of my sources have a video of this. That is a real shame, because this is something that I would really have to see to believe. The LifeHand has been put on Pierpaolo Petruzziello, an amputee who says that he can do complex movements by thought alone.

The LifeHand is connected to the user via electrodes, and it is a project that is five years in the making, with three million dollars in funding from the European Union.

Yes, this is clearly only the beginning of this new wave of prosthesis that involves electrodes to the brain in order to simulate complex body movements. I suppose that this would be a good time to make Terminator and Cylon jokes, but I don’t think it is at all appropriate. If I lost an arm and could gain a robotic one with complete control, then I would feel pretty grateful.