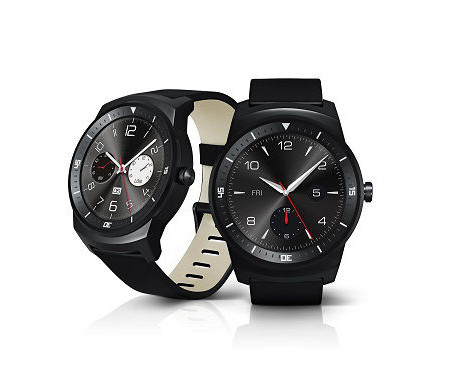 The smartwatch industry certainly looks as though it is about to take off in a huge way, especially when you take into consideration how all the major players in the mobile device market are starting to look into the possibility of churning out a range of such devices. South Korean company LG has just revealed their latest masterpiece, which is known as the LG G Watch R, and this bad boy looks all set to make an appearance at IFA 2014 that is happening in Berlin, Germany, early next month. What has LG done to make the LG G Watch R more unique than anything else in the market would be the fact that this is the first watch-style wearable device in the world that sports a circular Plastic OLED (P-OLED) display, which means it will make full use of its watch face. Now that is something that the rest of the smartwatches in the market are unable to lay claim to.

As mentioned above, the most eye-catching feature of the LG G Watch R would be its 1.3-inch full circle P-OLED display that is more than capable of rolling out stunning image clarity, even if you were to stand under bright sunlight in a hot and sunny afternoon, and your eyes will still be greeted by superb clarity regardless of the angle where you view it from. Underneath the relatively tiny hood would be a powerful 1.2GHz Snapdragon 400 processor, which will have 4GB of internal memory in tow, 512MB RAM and a durable 410mAh battery.

The LG G Watch R will run on Android Wear, and this translates to its ability to effortlessly play nice alongside all of the other compatible apps that are available in the Google Play Store. If you happen to lead a really active lifestyle, then you will be pleased to hear that the LG G Watch R itself comes with an Ingress Protection Rating of IP67, which means it is capable of running for up to half an hour in one meter of water. There is no word on pricing just yet, but availability details will be shared at IFA 2014 later.