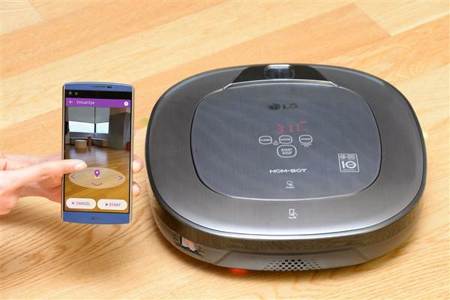 Boy, don’t you just love the way technology advances over the years? There has been changes here and there, where small steps have been taken, not to mention leaps being made from time to time, to make live a whole lot easier and bearable for housekeepers and single parents alike. The vacuum cleaner has certainly come a long way in making life far more convenient to live, as it goes about its task, sucking up dust and other kinds of unmentionables into a dust bag. Well, vacuum cleaners has since gotten themselves a brain, so to speak, by being able to work automatically, returning to their charging dock when they are low on juice, but LG wants to further that idea by rolling out their latest generation of LG HOM-BOT model that will boast of a useful augmented-reality control mode to complement its existing high-tech features.

Rather than having to choose an area on an overhead map or even to send the robot remotely to an area of the house that requires a touch-up of cleaning, all that you need to do is to pop open the camera in the associated LG smartphone app before you touch the spot in an ordinary view of the room. The vacuum cleaner itself will then determine where your relative position is as well as where you have asked the HOM-BOT to move into.

This is definitely a useful upgrade to have for a device that is already so advanced. Right now, the HOM-BOT itself can be instructed to patrol the house even when you are not around, and it doubles up as some sort of security officer since it will send an alert if it detects motion. Heck, you can even take over the HOM-BOT and pilot it manually as though it was some sort of remote controlled toy while you go about with your cleaning chores from the comfort of your couch.