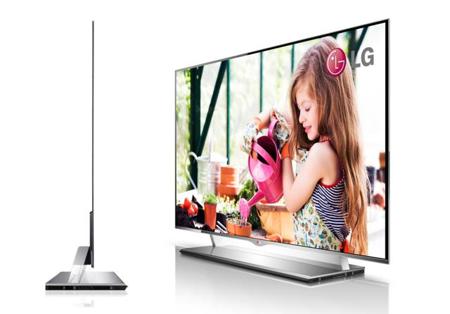 You know that most modern day homes these days have a large, flat screen TV sitting in the middle of the living room, but how many of those do look as sexy as what LG has to offer? LG Electronics has just announced their latest 55” OLED TV for folks living in the UK, and just in case you were wondering, yes, this is the model that laid claim to the “world’s first” title, where it was showcased exclusively at Harrods Technology, and will be made available to those who have placed their pre-order as it is delivered later this July.

The LG OLED TV, also known as the 55EM970V if model numbers are your cup of tea, measures a scintillating 4.5mm thin, and despite its 55” size, it weighs under 10 kilograms, now how about that? Despite being super thin that we still find it rather difficult to believe, it is still capable of producing exceptional picture quality as well as delivering spectacularly vivid and accurate colors, thanks to its superior WRGB technology.

Brian Na, President of LG Electronics UK, said, “We are proud to be the first in the world to offer consumers a big screen OLED TV. LG’s next generation display is a true game changer, which will forever alter the way we think about TVs. Since OLED TV was first unveiled, we’ve been working tirelessly to bring what we call ‘the ultimate display’ to market. I’m sure you’ll agree that our 55-inch OLED TV has definitely been worth the wait.”

LG’s OLED TV will merge their leading Smart TV technology and Cinema 3D capabilities, in addition to edge-to-edge Cinema Screen Design, resulting in the most immersive and complete home entertainment experience, not to mention having the kind of stunning style to go along with it. The asking price for the LG 55EM970V? It retails for a whopping £9,999.99. Eeps!