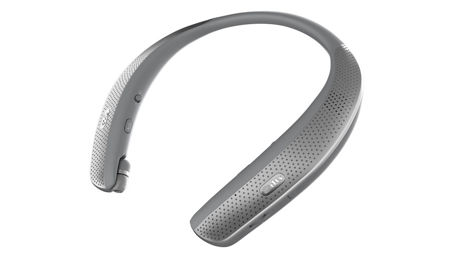 Not all headphones are created equal, that is for sure. You can have earbuds that remain in place no matter how active a lifestyle you lead, while others might settle for a pair of noise-cancellation headphones — the large, bulky ones that make sure your long haul flight has one of the best possible experiences. Well, LG has released something that it teased at CES 2017 right at the start of the year — the LG Tone Ultra.

The LG Tone Ultra might be mistaken for a pair of headphones, but in reality, this is actually a new kind of wearable speaker that will make sure your body feels as though you were right smack in the middle of the action, be it a high octane game, or in an action movie.

The $299 LG Tone Studio is the latest around-the-neck Bluetooth wearable speaker that will play nice with Bluetooth audio enabled LG Smart TVs running WebOS, providing you with the experience of surround sound regardless of where you are. What makes the LG Tone Studio so special?There are not just one or up to three, but rather, a quartet of speakers that will truly let you immerse yourself in real 3D Surround Sound whenever you indulge in watching a movie, playing a video game, streaming music or simply talking on the phone.

During moments when personal surround sound is not required, the LG TONE Studio will boast of the legacy TONE tangle free, retractable earbuds that are seen in LG’s range up of Bluetooth headsets such as the LG Tone Ultra, LG Tone Active, LG Tone Infinim, and LG Tone Platinum. Sharing the action is as simple as turning on the Dual Play feature, as you hook up a pair of LG Tone Studio wearable speakers so that you can let everyone else around you enjoy sounds from a movie, playlist or others.