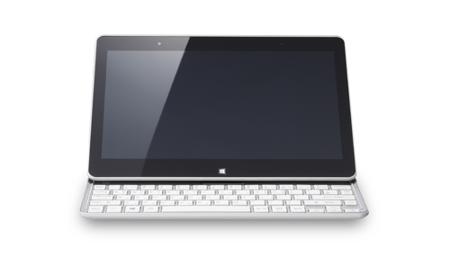 LG might not have too much luck in the world of tablets or notebooks, but it seems that they intend to do something of the situation and make good of it. LG Electronics has just announced that they will be showing off their own take on a tablet-notebook hybrid device at the upcoming Mobile World Congress (MWC) which is happening in Barcelona, Spain. Simply known as the LG Tab-Book, it will come equipped with Long Term Evolution (LTE) technology in order to deliver a high speed Internet experience, enabling users to hook up to the Internet regardless of where they are. Of course, this is all theoretical, since we do know that a whole lot of its connectivity depends on the area of coverage.

The LG Tab-Book is a beauty to behold for sure, where it boasts of a hidden slide-out physical keyboard, making it a whole lot more functional compared to a conventional tablet, delivering greater levels of productivity when it comes to creating documents, spreadsheets and presentations, especially when you are on the move.

Microsoft’s Windows 8 is the operating system of choice for the LG Tab-Book, and it will be powered by an Intel Core i5 processor, sporting a precise 5-point multi-touch screen and a superb slide-out keyboard which helps differentiate it from other hybrids. Press the Auto-Sliding button and the keyboard will magically emerge from behind the screen for instant touch typing action.

Your eyes will also be most pleased with the Tab-Book’s In-Plane Switching (IPS) display, where it is said to deliver a premium picture with lifelike color expression and a wide 178-degree viewing angle. Out in Korea later this week, confirmation in other markets remains to be known. Pricing details remain sketchy at best, but you can be sure that it is not going to come under the entry-level price tiers. Would you pick this over the Dell XPS 12, or the Lenovo Yoga 13?