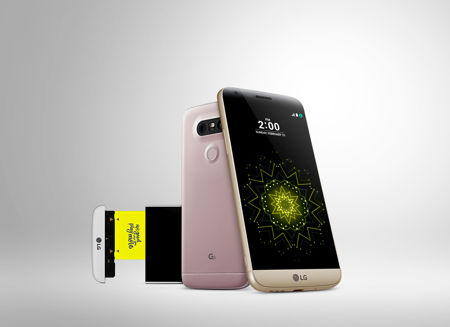 When it comes to smartphones, there are dime a dozen models to choose from – but LG intends to win your heart and your mind with their latest flagship device, the LG G5. The LG G4 was revealed in April last year, and its predecessor was certainly a flagship smartphone worth its salt to occupy such high place. This time around, what does the LG G5 deliver to the table that makes it all the more unique?

For starters, the LG G5 smartphone will boast of a brand new design with not only a sleek, metal unibody, it also comes with a slide-out battery as well as a modular type form factor, allowing one to enjoy a greater smartphone experience. When it works with LG Friends, which is a collection of companion devices, this would be able to let the LG G5 function as a digital camera and Hi-Fi player, among others.

Within the sleek metal aluminum body, the slide-out battery is a snap to swap, allowing you to exchange a depleted battery in a matter of just seconds, while the camera shooting capability of the LG G5 ups the ante further thanks to its 135-degree wide angle lens that allows you to choose between standard or wide angle lens so that you can obtain more visuals in a single shot. There is also the Always-on Display that makes notifications a mere glance away with the time, date and more available anytime without waking the G5.

As for the 3D Arc Glass which is prominent in the smartphone’s 5.3” display, it creates a gentle curve and a smooth colorful metal surface via an advanced microdizing process which takes anodized aluminum to a whole new level. Above all, the insulative antenna will remain invisibly integrated into the body without disrupting the seamless look of the metal uni-body. Pretty fly for a flagship device, don’t you think so?