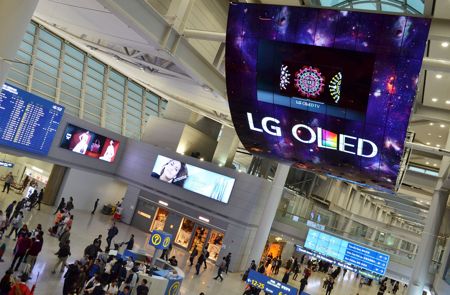 Flat screen displays for the home have improved by leaps and bounds ever since the jump to LCD TVs were made compared to the fat and chunky CRTs. Having said that, we have definitely moved on from that of a LCD TV to plasmas at one time, followed by LEDs and now, OLED TVs, curved or otherwise. LG continues to showcase their expertise and flex their muscles in the world of displays by showing off what they have called the world’s largest OLED display. This amazing wonder is a one-of-a-kind signage that has been installed at Incheon International Airport in Seoul, South Korea, in order to introduce the millions of travellers that pass through its terminals each year to the magic of OLED.

LG happens to be the world’s leading OLED TV manufacturer, so it is far from surprising to see such a display make its appearance at South Korea’s Incheon International Airport. LG has collaborated closely with the renowned French design firm Wilmotte & Associés in order to come up with the massive structures that adorn the main terminal of the award-winning airport.

Each individual sign will feature 140 55” curved OLED panels, and this eventually pans out to deliver a display that stands at 13 meters high and 8 meters across, which is the equivalent to three large-sized shipping containers. The two curved displays will boast of a range of content to demonstrate the capabilities of OLED technology, including brilliant fireworks set against a night sky. Taking into consideration that every single individual pixel in an OLED display emits its own light, one does not need to have heavy LED backlighting, which would mean both of the airport displays are incredibly light and flexible, so much so that they are a spectacle to behold as they hang from the ceiling with minimal support.

Does this make you want to run out to purchase an OLED TV now?