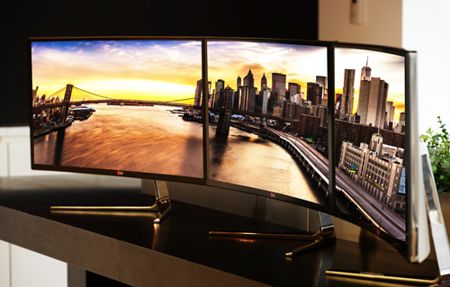 It does seem as though the curved TV phenomenon is about to make its way over to the desktop scenario, as the folks over at LG can attest to. In fact, LG has already set up a stage for their IPS 21:9 Curved UltraWide Monitor to make an appearance at IFA 2014 that is happening in Berlin, Germany, right at the beginning of September. It will carry the model number 34UC97, and it prides itself in being the first monitor in the world that incorporates a curved IPS screen with a 21:9 aspect ratio. This eye-catching 34-inch monitor will be able to deliver remarkable picture quality and a range of convenient connectivity options.

Being the flagship monitor, the LG IPS 21:9 Curved UltraWide Monitor happens to be touted as a complete monitor solution, although I am quite sure that a few months, or perhaps a year, down the road, LG will come up with a sequel to this particular monitor, boasting of new features and functions, making one wonders just how complete of a solution its predecessor claimed to be when it was first released? But I digress, let us focus on the here and now. This Curved UltraWide Monitor is equally suited to the needs of professional users and home entertainment enthusiasts, thanks to its additional screen real estate, letting you be more productive in the shortest amount of time possible.

Through the introduction of a gentle curve to a 21:9 aspect ratio monitor, LG has come up with an extremely unique product which is capable of delivering a more immersive experience. Sporting a Quad HD resolution display with 3440 x 1440 pixels, digital photographers and filmmakers will be able to echeck out the level of detail and accuracy that their work demands. It plays nice with both PC and Mac platforms, as the LG 34UC97 monitor will be a willing beast of burden to handle heavy graphics and videos. There is also Thunderbolt 2 support for high-speed data transfers, letting you daisy chain multiple devices together, while your ears are treated to MAXX AUDIO and a 7W stereo speaker system. Pricing details remain unknown as at press time.