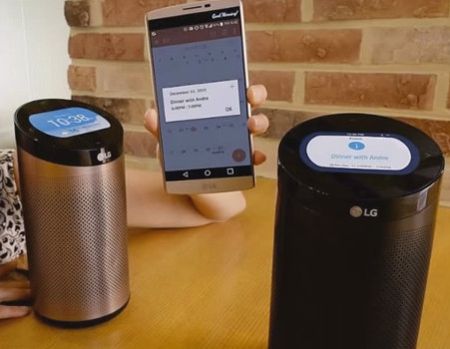 CES 2016 will be a platform where there are many different kinds of consumer electronics devices which will be revealed, and you can be darn sure that the sheer number of them will be overwhelming, to say the least. Having big players appear is also a norm, and LG will be one of the main exhibitors there. You can bet your bottom dollar that LG will have their fair share of devices to be revealed, and we have caught whiff of one of them – and it would be known as the LG Smart ThinQ Hub.

Now, I am quite sure that many people would be wondering just what the heck is the LG Smart ThinQ Hub all about – it happens to be a device that functions as a gateway to smart sensors and connected appliances in the home, where at the same time, is also capable of displaying reminders from personal calendars and to stream music from its built-in speaker. This elegantly designed Smart ThinQ Hub boasts of a 3.5-inch color LCD display and will hook up to a smartphone app in order to facilitate two-way communication with smart appliances and smart sensors in the home.

The Smart ThinQ Hub will also be able to monitor, control and collect information from home appliances including the likes of washing machines, refrigerators, ovens, robotic vacuum cleaners, air conditioners and a variety of sensors. All collected data will be displayed in the form of notifications on the LCD screen or announced through its speaker of the LG Smart ThinQ Hub, which functions as the central “hub” of the smart home. This means you can communicate using a solitary device rather than a separate smartphone app for each smart-enabled product.

Form without function is incomplete, which is why the Smart ThinQ Hub is also aesthetically pleasing, arriving in a metallic body with two attractive color schemes: Champagne Gold and Black. So far, there is no word on pricing or availability as at press time.