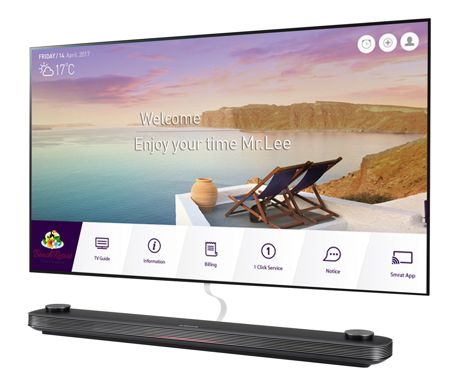 Being at a hotel would mean one thing — you are either there for business or for leisure. Regardless of which particular category that you fall under, you would definitely need to have some downtime to enjoy a break, and this more often than not includes watching some TV. While just about all decent hotel chains have already made the jump from a regular chunky CRT to a flat screen TV of sorts, how about upping the ante? South Korean company LG has stepped up to the plate with the thinnest hotel TV in the world which claims to deliver unmatched picture quality with a unique design.

Known as the LG OLED “Wallpaper” Hotel TV, this special razor-thin display more or less ends up as one with the wall. This is the world’s first 65-inch class OLED Wallpaper Hotel TV (going by the model number 65EV960H) that will merge LG’s industry-leading hotel TV technology alongside the sleek aesthetic and unparalleled image quality of the award-winning LG SIGNATURE OLED TV W.

It sports the special ability to turn pixels completely on or off, which means that the LG OLED TV is capable of rendering perfect black levels. In other words, viewers will end up with an infinite level of contrast in order to enjoy vibrant colors, immersive details and truly lifelike images which regular LCD displays are unable to produce.

Just how thin is it in order to obtain such an accolade? We are looking at a mere 3.86mm (0.15 inches), which would allow the 65EV960H to be easily installed in luxury hotel suites using ultra-slim mounting brackets that come with a magnetic mat in order to create a truly seamless design. This makes it end up as though it is one with the wall. All of its electrical components will be housed in the device’s Media Box, where it is hooked up via an ultra-thin flat cable, so that the panel can lie flush against the wall like a piece of art while making installation a snap.