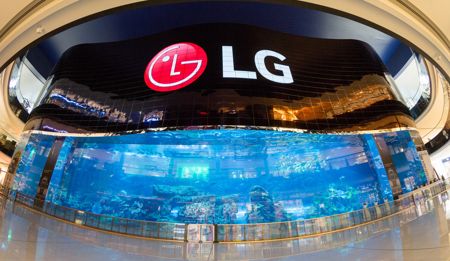 “Go big, or go home” is a statement that many of us have heard throughout our life. After all, it carries the connotation of making sure that things are always done in the proper manner to the best of one’s ability, and that is exactly what the folks over at LG have achieved with their latest release — the world’s largest OLED screen. This is an advanced commercial display that boasts of extremely high resolution which is fitting for the largest HD video wall to date.

Where else would we be able to catch a glimpse of this other than in Dubai? After all, Dubai has its fair share of glitz and glamor, thanks to the bountiful oil money that the kingdom has received over the past few decades. This OLED screen from LG is located at the Dubai Aquarium, where the mega-sized video wall was made possible courtesy of 820 Open Frame LG OLED digital signage panels. In order to achieve this, a gargantuan 7,600-square-foot screen that measures a whopping 164 feet wide by 45 feet tall had to be put in place.

LG did not go about this alone though, as they worked with Emaar Entertainment, who happens to be the operator of the world-class aquarium that is located in the Dubai Mall right next to the Burj Khalifa. LG has long maintained its standing that OLED technology is a next generation display technology that should be pursued since it is emissive, allowing the display to emit its own light so that there is no need for backlighting which is not only bulky, but inefficient as well. This would see your eyes experience the deepest blacks possible, in addition to virtually infinite contrast ratios and life-like colors. It would be nice to see this technology trickle down to the average consumer class OLED TVs in the near future though.