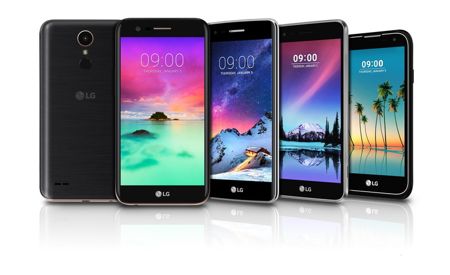 LG is no stranger when it comes to releasing new smartphones, and this year we have seen a couple of flagship smartphones already — the LG G5 as well as the LG V20. Each of them has its own strengths and weaknesses, but they are both more than decent performers in the market compared to their rivals. Having said that, 2017 will kick off with a bang as LG is working on a new collection of K Series smartphones which will target the premium level mass-tier market.

The four new mass-tier K Series smartphones alongside the new LG Stylo 3 are set to debut at CES 2017 in Las Vegas early next month. Specially designed in order to deliver best-in-class technologies, such as the 120-degree wide angle front camera lens, 2.5D Arc Glass design and rear fingerprint scanner, expect these beauties to flood the mid-range market and be a game changer.

First of all, the LG K10 will sport a 5.3-inch HD In-cell Touch Display, a 5MP front-facing camera with 120-degree wide-angle selfie lens, a 13MP rear camera which has seen action in its flagship LG G series so far, a fingerprint scanner, a metallic U-frame, and an elegant 2.5D Arc Glass design.

As for the LG K8, it boasts of a 5-inch HD In-cell Touch display, a 5MP shooter in the front and a 13MP camera at the back, LG’s intelligent UX features like Auto Shot and Gesture Shot, among others.

As for the LG K4, this particular smartphone will come with a sensitive 5-inch In-cell Touch display and 5MP front and rear cameras, not to mention both Auto Shot and Gesture Shot features that are part of the LG K8. Arriving in an attractive and slim 7.9mm profile alongside a removable 2,500mAh battery, you can further increase its storage capacity via a microSD memory card slot.

Last but not least, the LG K3 would be the smallest of the lot, featuring a 4.5-inch On-cell Touch display, a 5MP camera at the back and a 2MP lens in the front, in addition to support for Gesture Shot and a microSD slot for memory expansion purposes.