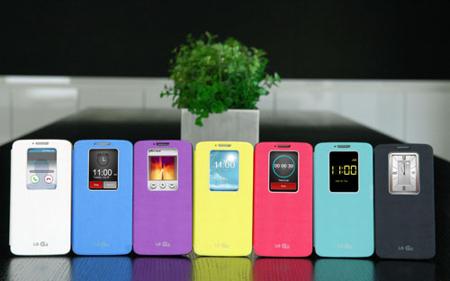 It goes without saying that every single company needs a defining product that they can call their flagship, as that would represent the pinnacle of the company’s achievement in that particular niche. For instance, when it comes to the world of smartphones, Nokia of Finland has their recently introduced Nokia Lumia 1020 with a whopping 41-megapixel camera, while Samsung has been riding high with their Samsung Galaxy S4 (and its many variants) for some time already, with Apple preparing a new iPhone, leaving the iPhone 5 to be the standard bearer at the moment. What about LG? Well, LG used to have its Optimus G Pro as its flagship device, but in the months to come, we do know that there is a new smartphone arriving that will take over the Optimus G Pro, and that would be the LG G2. Having said that, the LG G2, being a flagship smartphone, should be accompanied by a case worthy of its calling, no? This is where the LG QuickWindow case comes in.

The LG QuickWindow is said to be an aesthetically beautiful case, and it would certainly set a high standard for the rest of LG’s growing premium smartphone accessory range which will comprise of cases, headsets and portable chargers. Why is it called the LG QuickWindow? Well, the answer is pretty obvious thanks to an opening or “window” that is located on the cover of the QuickWindow, allowing users to take a glance at different information displays without having to go through the hassle of opening the cover flap.

With but a light swipe of a finger, the QuickWindow UX will appear in the window which users are able to check out while on-the-go. All information that can be viewed through the QuickWindow cover are important ones, including a clock, weather report, alarm, music player, incoming phone call details and incoming text messages.

We have no word on pricing, but it should arrive in seven different colors including black, white, pink, purple, blue, mint and yellow at the same time that the LG G2 is unveiled.