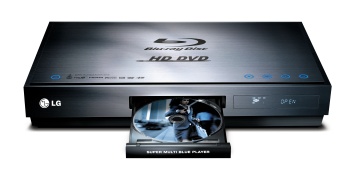 You know it’s going to be an important event when you can get a bunch of journalists out of bed for 8am on a Sunday morning. LG managed this trick with the first press conference of the 2007 CES, showcasing their latest technology – a high definition DVD player that is capable of playing both HD-DVD and blu-ray discs.

The “Super Multi Blue” player BH100 is a very sleek looking device with touch sensitive controls, ringed with a soft blue backlight. It wouldn’t look out of place in any high end equipment stack, which is lucky because at $1200 that’s the market LG are going after.

So why is this such a big deal? To answer that we need a small histroy lesson: With the development of honking-big-plasma-screens(tm) people have started to realise that the DVD format is actualy pretty low resolution. Enlarge a modern blockbuster movie to 40 or 50 or 100 inch screen size and you start to see jagged edges and a distinct lack of detail. Don’t forget that DVD is over 10 years old now and 10 years ago your average screen size was something like 20 or 30 inches.

But there’s a catch. Two competing and incompatable formats were announced by Toshiba (HD-DVD) and Sony (Blu-ray). Confusion ensued, various movie studios backed the different formats and consumers, concerned by all the wrangling, bought nothing.

So we come to the point of why this announcement is good news for the whole AV industry – now that consumers who are interested in high definition can buy one box to play both formats, they don’t have to worry about it any more.

The feature set is pretty complete – it will play back standard DVD, HD-DVD, and Blu-ray content. As LG are members of the blu-ray alliance it will handle all the interactive content of that format. For HD-DVD you get basic movie playback and a chapter/menu system but you don’t get all the interactive content. Personally I don’t see this being a deal-breaker – people buy DVD players to watch movies on, not play video poker with.

The player seemed responsive enough during the demo – 25-30 seconds from disk insertion to first picture. Apparently this is the fastest of any player out there at the moment, so you don’t pay a penalty for it being multi format. Outputs include HDMI and component video plus an optical output for surround audio content.

It doesn’t handle Audio CDs though, so don’t go throwing out all your old kit just yet!

In related news, LG are also showing the world’s first 100 inch LCD screen at CES this year but at a shade under $15,000 it won’t be in a home near you for a while yet.