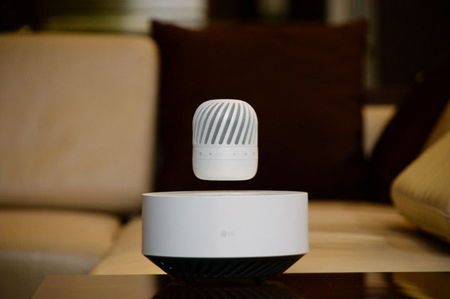 When it comes to portable or wireless speakers, most of us would look for the model that is hardy in nature, being able to take just about anything and everything that you throw in its direction. Well, LG has a slightly different route this time around with the LG PJ9, where this wireless speaker is certainly out of the ordinary in terms of its design. After all, most of the portable speakers that are in the market require you to bring them around with you, or even hook them up to a carabiner. For those who use it at home, you leave it on the table. Not so with the LG PJ9 that is all set to debut at CES 2017 — this particular speaker will levitate, as though by magic — now how about that for impressive?

The LG PJ9 is certainly a mesmerizing wireless speaker in its own right, and the magic will happen when you place it over the accompanying Levitation Station. It has the ability to deliver high-quality audio, and at the same time offer a lasting impression thanks to its eye-catching design. It also has a looks that will certainly turn heads whenever anyone lays their eyes on it. It does not matter whether the LG PJ9 is used to play music, podcasts or different kinds of audio content, it will be able to do all of that seamlessly while looking fantastic — even in the outdoors.

Making use of powerful electromagnets that is included deep inside the Levitation Station, the PJ9 will be able to achieve a stunning visual effect of floating in mid-air, without the need for any kind of wire to hold it in place. Right smack in the middle is a 360-degree omnidirectional speaker that has a turbine blade-inspired design, delivering deep bass thanks to the subwoofer that is embedded within the Levitation Station. The LG PJ9 itself will also feature Dual Passive Radiator technology that can reproduce flush mid-range tones as well as crisp highs for enhanced sound quality. No word on pricing yet as at press time, but we expect that small issue to resolve itself when it is officially announced at CES 2017.