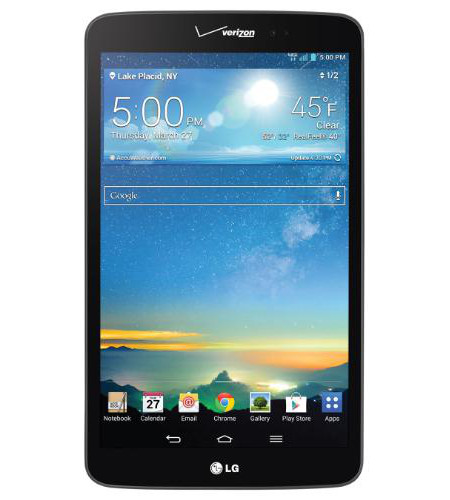 Verizon Wireless has stepped forward to announce that the LG G Pad 8.3 LTE tablet will be made available to the masses from March 6th – that would be today, where one can opt to pick one up by placing an order online, or if you prefer to have this thing known as human interaction, you can always choose to drop by in one of Verizon’s brick-and-mortar stores. To make sure that the LG G Pad 8.3 LTE starts off on the right footing and with much fanfare, the tablet will be made available for $99.99 a pop, where it will be accompanied by a new, two-year activation from March 6 until March 10. Once March 10 has passed us by, the tablet itself will cost another $100 more, which means you will have to fork out $199.99 for the very same new, two-year activation. Alternatively, customers are able to add the tablet to their More Everything plan for another $10 each month.

The LG G Pad 8.3 LTE would be able to offer smooth, seamless connectivity, regardless of whether you are using it purely for business or for fun. It can also be paired in a jiffy to a slew of Android smartphones including the award-winning LG G2. Should you decide to maximize your productivity, the Q Pair App would come in handy, allowing the LG G Pad 8.3 to deliver speedy access to online entertainment content as well as productivity tools.

The LG G Pad 8.3 LTE is not a burden to carry around at all, where it would tip the scales at under a pound while fitting to the palm of your hand perfectly. As for its hardware specifications, it will feature an 8.3-inch Full HD IPS display with 273 pixels-per-inch, which has been specially optimized for viewing movies, TV shows and social media or reviewing email and presentations. The slim bezel itself offers near edge-to-edge viewing, where one will be able to enjoy a bright, sharp picture from virtually every angle. The implementation of LG Knock would enable the display to wake up, as well as to put the tablet to sleep with but two taps. A quad-core 1.5GHz Qualcomm Snapdragon processor runs proceedings from under the hood, where it is accompanied by 2GB RAM, 16GB of internal memory, a microSD memory card slot, and a 4,600 mAh battery.