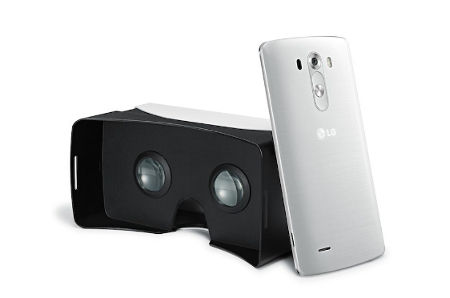 Virtual reality does seem as though it is all the rage these days, where there are a fair number of companies out there that do seem to want to introduce new VR headsets from time to time, where each of these headsets come with their fair share of features – not to mention some are packaged more nicely than the others. Well, South Korean company LG Electronics has an offer that some might find it difficult to refuse -that is, to offer a free Virtual Reality (VR) headset to those who decide to pick up a brand new LG G3 smartphone at participating stores in the US.

Why was this move taken? Well, it seems that LG’s VR for G3 would then open the door for LG G3 owners to experience a wide range of VR-compatible apps as well as games that can be downloaded on Google Play. This particular promotion will be made available via participating stores around the country, with the purchase of a spanking new LG G3. Apart from the free VR unit (do bear in mind that this is a while stocks last situation), such a generous offer will also include an in-box QR code which will unlock a free download of select VR gaming content. Consumers are also encouraged to participate so that they stand a chance to pick up an LG VR headset thanks to LG’s Facebook page simply by leaving a comment concerning the designated image.

Not only that, VR for G3 will also play nice with Google Cardboard, and this means that no assembly is required, quite unlike the Avengers. All that one needs to do is to insert the phone into the headset, and you can then start to enjoy content on it almost instantaneously. The magnetic gyroscope sensor in the LG G3 will enable users to pick applications as well as scroll through menus without having to touch the display.