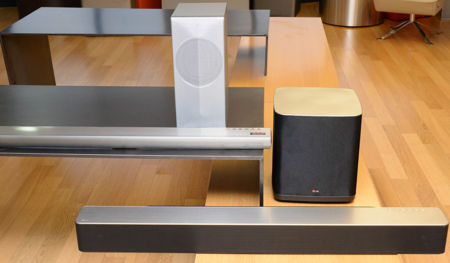 Boy, has another year passed us by so quickly, that it felt just like it was last month that the madness of CES has passed us by. Before you know it, another monster edition of the world’s biggest consumer electronics show is about to happen, and you can be sure that the industry’s biggest names are going to be there to make a statement for the year ahead – which more often than not comes in the form of newly announced hardware. Having said that, LG of South Korea has prepared the LG Music Flow Wi-Fi Series range that will debut at CES 2015 among other offerings.

The other items in their lineup would be their very first battery-powered Wi-Fi Speaker (Model H4 Portable), advanced Wi-Fi Sound Bars (Models HS7 and HS91) and the Streaming 3D Blu-ray Player (Model BP550). These speakers happen to be specially designed so that they will play nice with Android and iOS devices, now how about that for compatibility?

Apart from that, individual LG Music Flow Wi-Fi devices can function independently, or you have the option to connect it to another device wirelessly, thanks to the wonders of Advanced Wireless Network and Dual Band Wi-Fi (2.4/5GHz) technology which will be able to deliver a seamless audio experience. Being different from other Bluetooth speakers, streaming to a Music Flow Wi-Fi Series speaker from a smartphone will continue without any interruption, even when you are receiving an incoming call. Should your home library be insufficient for your entertainment needs, fret not, there is also the ability to stream music from service providers including the likes of Spotify, Deezer, Napster, and TuneIn.

There is also the Auto Music Play feature that offers LG Music Flow the ability to deliver a user experience which will maximize convenience for listeners who are constantly on the move. Imagine music on your smartphone playing automatically on a Music Flow Wi-Fi speaker whenever the handset is within a one foot radius, making it seem like magic to the uninitiated. We cannot wait for the official details to be revealed when CES 2015 rolls around in the first week of next year.