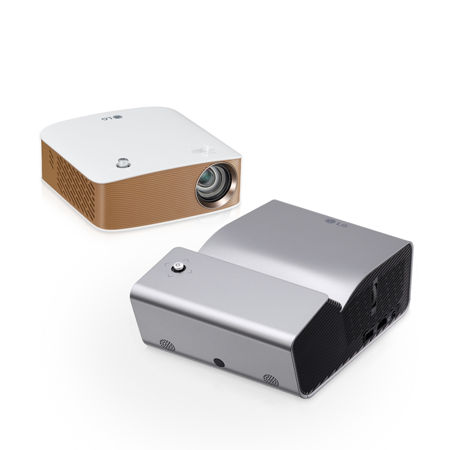 Did you know that LG Electronics happens to be the world leader in LED projectors since 2008? Well, this might be a little known fact, but it is still a fact. In fact, LG has just announced plans to expand its Minibeam range of portable projectors, where a couple of these new projectors that hail from the LG Minibeam series would arrive in the form of models PH450U and PH150G. These two models will bolster screen sharing capabilities with Miracast and wireless display, where it comes with expanded brightness and superior portability in order to deliver flexible viewing regardless of the space in question.

The PH450U is touted to be one of the brightest battery-powered ultra short-throw projectors available in the market when released, where it will sport up to 450 lumens, letting users create a cinematic experience inside or outside of the home with the ability to display a sharp 80-inch HD (1280 x 720) image from a distance of a mere 13 inches from the screen. Not only that, the PH450U will also be able to be set upright so that it can render images on any flat, horizontal surface, letting users transform desks, tables and even floor surfaces into movie screens.

In terms of connectivity, users can seamlessly transfer content directly to the projector via an HDMI cable with MHL capability, or to do so via a USB drive, which would mean it offers the ultimate in viewing versatility. The rechargeable 2.5-hour battery will allow you to bring this 2.4-pound projector virtually anywhere, using it anytime without having to worry about plugging into a power source — unless you are going to watch Titanic or go through a Lord of the Rings trilogy marathon viewing session.

As for the new LG PH150G projector, it is even more compact at a mere 1.1 pounds, delivering up to 130 lumens of brightness and up to a 100-inch screen in clear HD resolution (1280 x 720) along with a rechargeable 2.5-hour battery built in. Regardless of which model you select, both will arrive with LG’s triple wire-free connectivity for a viewing experience free of wired connections for power, audio and video sources. The PH450UG and PH150G will retail for $649.99 and $349.99, respectively, as they arrive later this October.