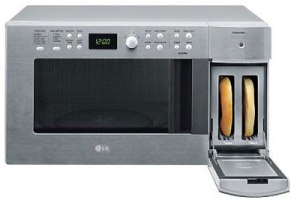 Every once in a while, some device comes along that makes me say, “That is so obvious! I should have thought of that. Then I could have got rich off of the patent”.

Such is the case with LG’s LTM9000, which is simply a microwave oven with a toaster attached to it. Considering that most of us use the microwave and the toaster in the same room, it really isn’t rocket science to put the two together. I’m sure you’re probably wondering why you didn’t think of such an obvious improvement to the kitchen.

The LG LTM9000 has 900 watts of power for the microwave, and about 800 watts for the toaster. The toaster can toast at nine levels, which will hopefully be better than what most toasters can do. I don’t know about you, but my toaster has two settings: barely warm and charcoal black.

This product comes in “high-tech stainless steel” and is available in white or black for about $140.

I suppose that while we are talking about obvious improvements to the kitchen, why don’t we just clump all the kitchen appliances together. I see a device that puts together the microwave, toaster, blender, breadmaker, chopper, and anything else that I didn’t think of. Yes, I definitely see a future in kitchen appliances. Maybe I had better start building it now.