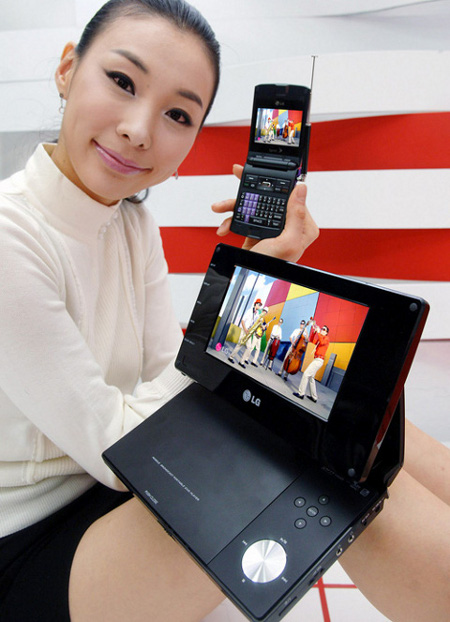 South Korean companies have certainly come a long way since they first started off on wobbly ground, and boy are they conquering the global market in many industries. Their automakers, Hyundai and Kia are even able to give the Japanese companies a run for their yen, and Samsung and LG are already global players where consumer electronics are concerned. We’ll be taking a closer look at the latter today, with LG Electronics having the honor of introducing the industry’s first portable, battery-operated mobile DTV Stateside, where it was specially designed to receive new rugged over-the-air signals being transmitted by local broadcasters. The future for mobile DTV looks bright as hundreds of stations are expected to sign on the air this year in order to cater for portable TV reception demand that is currently on the uptrend.

Officially known as the DP570MH Mobile Digital Television with DVD Playback, it will be formally introduced to the masses at CES 2010 later this week. According to Tim Alessi, director of product development, LG Electronics USA, “It’s easy to receive Mobile DTV broadcasts with LG’s new Mobile Digital Television set, which comes equipped with a built-in antenna and the ability to play DVD and CD discs. Even on a fast-moving train, a viewer should expect robust reception from favorite local channels – unlike some small digital TV sets currently on the market.”

Capable of receiving mobile DTV on demand virtually anywhere and at any speed, the DP570MH Mobile Digital Television ensures you don’t miss a TV moment regardless of where you are. Other features include stereo speakers and a 7″ widescreen display at WQVGA resolution of 480 x 234, where the LG Mobile Digital TV was designed in such a manner that you are able to tilt its display screen to your preferred angle so as not to strain those eyes of yours during lengthy shows. Placing it in your bag is a snap – just fold down the clamshell-style screen and it will transform into a manageable 9.5″ x 6.5″ device. Other abilities include audio, photo and video playback, USB 2.0 connectivity and an integrated DVD player. Expect the DP570MH Portable Television to hit the market later this year for $249.