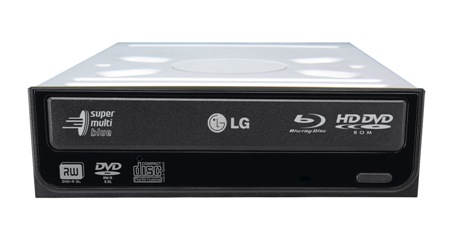 As well as announcing the world’s first multi standard high definition DVD player today, LG have also pulled off another world first by putting the same technology into a PC optical drive.

The GGW-H10N can read both high def DVD formats, DVD and CD, and wite to blu-ray offering up to 50GB of storage using dual layer media. What the press release doesn’t make clear, and what I forgot to ask (Doh!), is whether it will also read and write the more mundane CD and DVD formats we’re used to today.

edit: I’ve just taken a closer look at all the logos on the front of the thing and looking at those it does seem to handle pretty much anything you can throw at it!