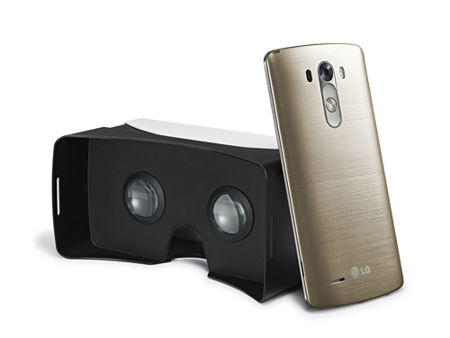 So, you happen to be in the market for a spanking new handset, but are not quite sure just which particular model to get? While we are well aware that LG is currently working on rolling out a brand new flagship device, which will most probably be known as the LG G4, the current flagship, the LG G3, is still worth checking out. So much so in fact, that both LG Electronics (LG) and Google are making virtual reality (VR) more accessible to mainstream consumers. How is this made possible? Well, LG has just announced that they will be offering a free VR for G3 giveaway for customers who pick up a spanking new LG G3 handset. LG’s VR for G3 will play nice with Google Cardboard and allow LG G3 owners to be able to experience a variety of VR-compatible apps and games which so happen to be available on the Google Play store.

Being different from different kinds of head-mounted VR devices which have been designed with their own processors and displays, VR for G3 would be able to take advantage of the visual and sound capabilities of the LG G3, as users get to enjoy a ­­lighter as well as more convenient solution. Courtesy of the LG G3’s class-leading Quad HD display, VR for G3 can then deliver a fair sharper image quality for a smoother, more realistic VR experience.

VR for G3 will also come with a unique design that makes use of the G3’s signature Rear Key layout, as opposed to other handsets that see the volume rockers being located on the side of the phone. This special design translates to the VR for G3 taking full advantage of the flagship phone’s 1W speaker with Boost AMP, as your ears get to enjoy richer, clearer sound effects which will complement the rich visuals.