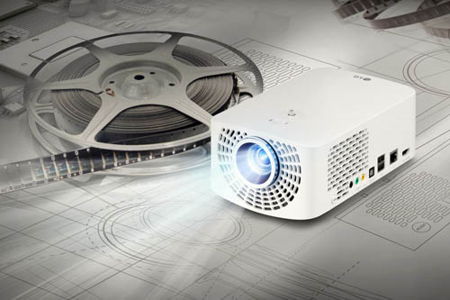 LG, a name that is famous in the realm of consumer electronics, also has another area that they are interested in – that of the projector market. Granted, the projector market – being a niche one, is split into two; where one of it would cater for the pico projector masses, while the rest would prefer something more traditional, with both of them having their own strengths and weaknesses to iron out. This time around, LG Has delivered a pair of new portable projectors that will see the expansion of the popular Minibeam range, with the Minibeam Pro (Model PF1500) being touted to be the perfect portable home theater solution, whereas there is the smaller Minibeam TV (Model PW800) which will be marketed as an on-the-go TV solution.

Regardless of which particular model that you decide to settle upon for, these projectors happen to come across as extremely lightweight, and will offer a far greater level of portability as opposed to conventional projectors. These projectors will be able to fit into a backpack or tote easily, where it is a matter of seconds to set up. Apart from that, the built-in wireless connectivity will enable easy content mirroring to a smartphone, tablet PC or laptop.

As for the LED illumination system’s lifespan, it has been estimated to be at 30,000 hours. If one were to take a calculator and make a careful breakdown, theoretically speaking, viewers will be able to enjoy their Minibeam projectors for a good 8 hours each day, and to do so for more than ten years running without the need to replace one of the three light units. In other words, it will be able to run for a long, long time, so much so that you would most probably upgrade to something better long before the unit runs out of steam. There is no word on pricing at the moment, but it will arrive in the US and Korea first before the rest of the world get their hands on both models shortly after.